Looming Even Larger Off the Court

Shaquille O’Neal Has His Hands Full as a Pitchman 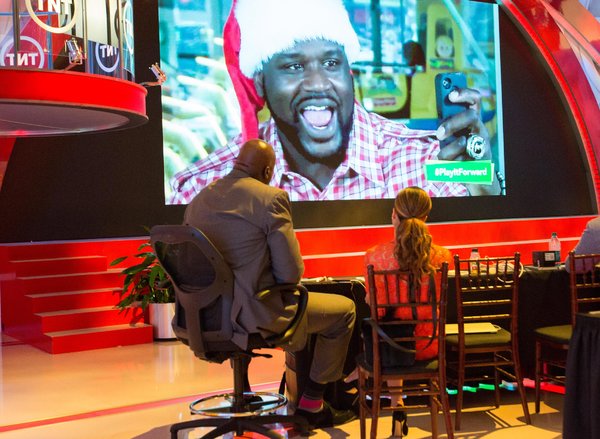 The former N.B.A. star Shaquille O’Neal and Laticia Rolle watching a presentation at the Shaq Summit.
KEVIN LILES FOR THE NEW YORK TIMES

ATLANTA — Shaquille O’Neal arrived at Turner Studios on a recent weekday morning wearing a tailored suit, size 60XL, and carrying a leather briefcase. He sat at a table at the front of the room, cracked open his laptop and prepared for a daylong seminar on a subject that was uniquely familiar to him: Shaquille O’Neal.

The occasion was the third annual Shaq Summit, a gathering of representatives from O’Neal’s many business ventures — a group that included the president of Zales (O’Neal has a men’s jewelry line) and executives from Arizona Beverages (O’Neal has a new fruit punch). One by one, they presented their campaigns and their products, and they detailed how O’Neal, the former N.B.A. star, figured into their plans.

“We’d like to see if we can create a little synergy under the Shaq umbrella,” O’Neal said.

O’Neal is difficult to miss these days. He might be dancing on a television commercial for Monster speakers. Or extolling the virtues of a medicated powder. Or selling Shaq-brand suits at Macy’s, Shaq-brand jewelry at Zales and Shaq-brand sneakers at J. C. Penney. All of which O’Neal supplements with his regular gig as an analyst on TNT’s “Inside the NBA,” a program that has given him a valuable platform since he retired from the league in 2011.

From the beginning of his playing career, O’Neal mastered the art of self-promotion by using his cartoonish size and colorful personality to his advantage. If the flip side was that he sometimes seemed to lack the edge on the court that others expected of him, his outside interests still paid off handsomely. And with more players seeing themselves as individual brands, perhaps O’Neal’s entrepreneurial feats, which have stretched into retirement and landed him on the cover of Bloomberg Businessweek, offer more of a road map than ever before.

Consider that O’Neal, 42, earned more than $21 million last year through his many business partnerships and his TV work, his management team said. And while several retired athletes make more — Michael Jordan collected $90 million last year, according to a recent survey by Forbes — few can seemingly compete with the volume and variety of O’Neal products. Representatives from 19 companies showed up for the Shaq Summit.

Shaq knows that it might seem like a lot of Shaq, except that he says he turns companies down. His name goes only on things that he likes, he said. Such as his Dunkman backpacks. And his soon-to-be-released line of Capelli slippers. And all four flavors of Soda Shaq.

Not everything O’Neal does is an instant triumph. There was his unfortunate experiment as a rap artist. His 1996 film, “Kazaam,” was not considered for an Academy Award. More recently, sales of Soda Shaq slowed. As Rob Marciano, Arizona’s executive vice president for sales, put it, “Soda Shaq went pretty good, but it was not a product that all the consumers gravitated towards.” That lesson led to the creation of a new fruit punch, which Marciano hopes is a winner.

“Shaq wants to be involved,” said Ian Gomar, who, as president of Shaquille O’Neal Consumer Properties, handles O’Neal’s licensing deals. “I’ve worked with a lot of athletes, and the beauty of him is that if I say, ‘Look, I need you at Walmart on Tuesday at 9 o’clock for a promotion,’ he’ll show up at 8:30.”

The night before the summit, O’Neal hosted his guests at an Atlanta Braves game. Out on the concourse, he signed autographs and posed for photos. He wore a T-shirt that featured the comedian Zach Galifianakis’s face.

By the next morning, O’Neal had swapped his T-shirt for a suit. He opened the summit by giving the assembled executives the wireless code.

The summit was the idea of O’Neal’s management team: Perry Rogers, Colin Smeeton and Mike Parris, who had sought a way to maximize O’Neal’s brand. While large organizations often stage similar events for corporate partners, individuals typically do not. Then again, O’Neal is a little different. 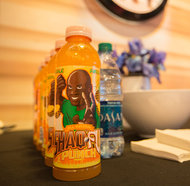 “I used to have to fly all over the place and meet with everybody,” O’Neal said. “Now, I can have everybody on the same page.”

Over the course of the day, more than a dozen commercials featuring O’Neal were screened, including one for Drone wristwatches, which were roughly the size of frying pans. (Subtlety is not a feature of the O’Neal oeuvre.) There were several spots for Reebok, which will soon add to its line of retro sneakers with the Shaq Attaq, the Shaq Attacked and the Pump Shaqnosis.

The formula is simple, O’Neal said: Make people laugh, and they will remember you. Whenever he meets with a new creative team, O’Neal offers input. “Give me what you want, and I’ll Shaq it up,” he says. Shaq-ing it up can be as subtle as a coy smile. Look for it soon on 11 million boxes of Fruity Pebbles.

“Love that smile,” said Lucas Mininger, a director of marketing at Chattem, a manufacturer of health care products like Gold Bond and IcyHot — two other O’Neal vehicles.

A fearsome 7-foot-1 center and a 15-time All-Star during his playing days, O’Neal said he first considered the big business of his future profession when he was a teenager. His father gave him a book that outlined some of the challenges for athletes in managing their money.

“My parents did a great job of scaring me,” O’Neal said.

Themes emerged at the summit. Synergy was a popular noun, and activate might have been the most popular verb — as in, “Let’s find bigger ways to activate around Shaq together!” It was part of a presentation by an executive at Turner Sports, who pointed out that O’Neal appeared on 212 studio shows during the 2013-14 regular season. That meant lots of exposure for O’Neal and lots of exposure for his brands.

“We tried to dress him 212 times,” said Steven Flick, the vice president of Peerless Clothing, which produces the Shaquille O’Neal Collection of business attire.

O’Neal’s large stature was another point of emphasis. An outlier was Greg Ferguson, the editorial director at Full Fathom Five, a publishing imprint that has been at work on a series of children’s books about a young boy named Little Shaq. Ferguson gave a synopsis for the first book, scheduled for publication next year: Little Shaq and his cousin start a gardening business.

Among the half-dozen other animated Shaqs who made cameos was the lead character in a video game called “Shaq Fu: The Legend Reborn.” The original “Shaq Fu,” which featured a karate-chopping O’Neal, was made by a different company and was widely panned by critics when it hit the shelves in 1994. (One website set out with the mission of getting people to destroy their copies for the sake of future generations.)

The new “Shaq Fu” is still under development. Matthew Karch, the chief executive at Saber Interactive, said some of the work was being done at the company’s studios in Ukraine. He addressed concerns that the launch of “Shaq Fu” might be undone by the turmoil in the country and insisted everything was on schedule.

Karch added that he was intrigued by all the talk of synergy at the summit. Still, the video game itself is something of a hobby for him — Karch’s day job is working on projects like “Halo: The Master Chief Collection” — so he said he was not necessarily looking to make a quick buck from product placements. On the other hand, he observed, “there’s no reason why Shaq couldn’t use some IcyHot after a big battle.”

Or, noted an intrigued Rogers, “maybe one of the Drone watches could be a weapon.”

One concern was whether O’Neal could sustain his popularity. It can be difficult for retired athletes because they tend to fade from public view, said Jim Andrews, the senior vice president at IEG, a sponsorship and consulting research firm. And in O’Neal’s case, his target audience during his playing days was a younger crowd. Children now might not be as familiar with his exploits as a basketball player.

“You can only maintain visibility with young people for so long,” Andrews said in a telephone interview. “But of most retired athletes, he probably has the best shot of maintaining that sort of relevance because of his personality, and his willingness and ability to do TV shows.”

O’Neal intends to stay busy. He is gearing up for another season with TNT. He plans to help promote his jewelry line and his suit collection. He has fruit punch to pitch, sneakers to sell and video games to plug. There is his television pilot (Shaq will play himself), his role as commissioner of sport for the Cartoon Network and his charitable work with Toys for Tots, which has enlisted him as Shaq-a-Claus.

Asked why he would want to attend law school, O’Neal said: “It’s not that I really want to be a lawyer. I just want to see my name on the side of a building.”

When it comes to the business of being Shaq, there is always room for more.

An earlier version of a picture caption with this story misidentified a woman shown with Shaquille O’Neal. She is Laticia Rolle, not Nicole Alexander.

An earlier version of this article described incorrectly one of the products Shaquille O’Neal endorses. It is a medicated powder, not a medicated power.

We would like to congratulate Jonathan Isaac and welcome him and his mom, Jackie, to our 24..7 family!

This is my description.